Our Lord chose to reveal the depths of His Mercy to a young, uneducated Polish nun named Sr. Faustina Kowalska in the 1930’s. From her childhood, Helena Kowalska was a well-balanced, obedient, and pious young lady. She was the third child in a family of ten – a child accustomed the both the arduous labor and poverty of farm life. Helena was only able to attend formal schooling for three winters, as her help was needed on the family farm. From the age of fourteen she worked as a domestic servant, caring for the children of wealthier families in the nearby cities of Aleksandrow and Lodz.

From the tender age of 7, Our Lord had given Helena the grace to understand she was called to religious life. Since Helena’s family rejected her desire to become a nun, she attempted to stifle the call, willingly accepted her position as a domestic servant, and developed friendships among her peers. One day during a dance Helena attended with her sister, Our Lord revealed himself to Helena in a vision. He was suffering in agony, and cried out to Helena saying: “How long shall I put up with you and how long will you keep putting me off (9, p. 7– Divine Mercy in My Soul, Congregation of Marians, 1987)?”

With her entrance into the convent of the Congregation of the Sisters of Our Lady of Mercy, on August 1, 1925, Helena Kowalska became Sr. Maria Faustina of the Most Blessed Sacrament. As soon as the veil was put on Sr. Faustina’s head, Our Lord immediately enlightened her soul regarding what she would have to suffer. Sr. Maria Faustina remained a member of the Congregation of the Sisters of Mercy until her death – a mere 13 years later – at the age of 33, on October 5, 1938.

Throughout those next 13 years, Our Lord shaped and modeled St. Faustina’s soul to closely resemble His own. He stated: “Your life is to be modeled on Mine, from the crib to My death on the cross (438, p. 193 – Divine Mercy in My Soul, Congregation of Marians, 1987).”

This simple, pious sister, who was the gardener, cook and porter for the community, was also Our Lord’s chosen Apostle and Secretary of Mercy. Though possessing no more than three winters of formal education, St. Faustina would pen a 600+ page diary containing some of the most profound insights regarding Our Lord’s Divine Mercy ever written.

St. Faustina’s entire mission was to convey to the world the unfathomable Mercy of Christ. Over the years, Our Lord revealed much to her.

My Mercy is Greater than the Sins of the World. © SalveMaterDei.com, 2012 E.A. Photo 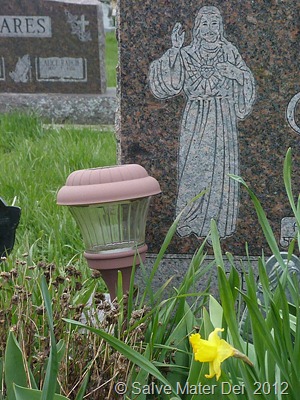 Blessed Are The Merciful, for Mercy Shall Be Theirs. © SalveMaterDei.com, 2012

Our Lord made it clear that mercy was His gift to an aching humanity, but that this gift must recognized, accepted, and acted upon. We must return mercy for the mercy that has been granted to us. Jesus states: “If a soul does not exercise mercy in some way it will not obtain My mercy on the day of judgment (1317, p. 473 – Divine Mercy in My Soul, Congregation of Marians, 1987).”

Our Savior cautions: “My hand is reluctant to take hold of the sword of justice. Before the Day of Justice I am sending the Day of Mercy (1588, p. 564 – Divine Mercy in My Soul, Congregation of Marians, 1987).”

As we prepare to celebrate the great Feast of Divine Mercy, initiated by Our Lord, and instituted by Blessed Pope John Paul the Great, let us continue with the eighth day of the Novena of Chaplets. For complete instructions please visit the Divine Mercy website run by the Marians of the Immaculate Conception: http://thedivinemercy.org/message/devotions/praythechaplet.php.

Today we also continue with the eighth day of the preparatory novena dictated by Our Lord to St. Faustina. Each day He instructed Sr. Faustina to bring a certain group of souls into the abyss of His mercy by means of prayer, and likewise to intercede for them before the throne of God the Father.

On the eighth day of the novena, Jesus requested of St. Faustina:

“Today bring Me souls who are in the prison of Purgatory and immerse them into the abyss of My mercy. Let the torrents of My Blood cool down their scorching flames. All these souls are greatly loved by Me. They are making retribution to My justice. It is in your power to bring them relief. Draw all the indulgences from the treasury of My Church and offer them on their behalf. Oh if you only knew the torments they suffer, you would continually offer for them the alms of the spirit and pay off their debt to My justice (1226, p. 441 – Divine Mercy in My Soul, Congregation of Marians, 1987).”

For the complete text of the eighth day of the novena, please visit the Divine Mercy Website of the Marians of the Immaculate Conception at: http://thedivinemercy.org/message/devotions/novena/eighthday.php.

One of the greatest ways we can share the Mercy of Christ with others is to pray for them. Thus, praying for the souls in Purgatory is a worthy act of mercy. Together with St. Maria Faustina let us immerse the suffering souls in the abyss of God’s mercy, and beg Our Heavenly Father to look upon then in no other way, but through the wounds of Jesus.

May the Risen Christ bless you and yours abundantly,

Praise the Lord for He is Risen!

Indeed, He is Truly Risen, Alleluia!

2 thoughts on “Secretary of Mercy”