Through this blog, I have previously expressed my esteem for Cardinal Timothy Dolan. Just prior to his elevation in February, I posted, “May God Bless Timothy Cardinal Dolan,” https://salvematerdei.com/2012/02/20/may-god-bless-timothy-cardinal-dolan/, tracing my admiration for this brilliant, charismatic leader to his early days as Archbishop of Milwaukee, and his involvement with my cherished Basilica of the National Shrine of Mary Help of Christians at Holy Hill. 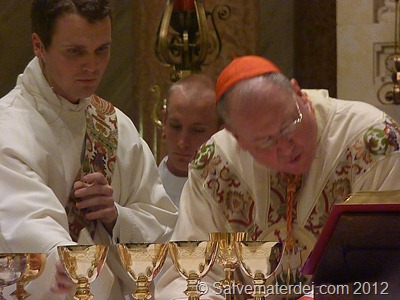 Months ago, when I heard that Cardinal Dolan had chosen to celebrate a Mass of Thanksgiving at Holy Hill, I was thrilled. It was under his leadership that Holy Hill became a minor Basilica. During Cardinal Dolan’s 7 years as Archbishop of Milwaukee, he affectionately used to call Holy Hill, “Our Mother’s House” or “Our Lady’s House.” How fitting for one of Blessed Virgin’s favorite sons to make his homecoming, in Her House. Over the months, the sense of anticipation built to a crescendo. As we would come and go for daily Mass the kids and I enjoyed watching the preparations unfold. For weeks the sacristy and grounds have been abuzz with busy hands. Even the very door handles of the upper church were scrubbed to a polish! 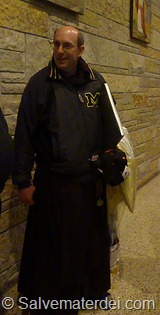 Fr. Don Brick, O.C.D., Rector of the Basilica, was charged with the monumental task of organizing the Cardinal’s visit to Holy Hill, National Shrine of Mary Help of Christians. He and the Archdiocesan staff worked tirelessly to make this homecoming a success. In recent weeks, one truly began to wonder if Fr. Don could bilocate – sightings of the busy friar were reported from all corners of the grounds. One would catch a glimpse of him with the grounds-keepers mulching the bushes, five minutes later he’d be in his confessional before Holy Mass, later we’d see him with workers repairing the wrought-iron railing around the out-door Stations of the Cross. The man was everywhere! His sense of humor remained in-tact, and it was easy to discern that each detail of these preparations was born of a labor of love. 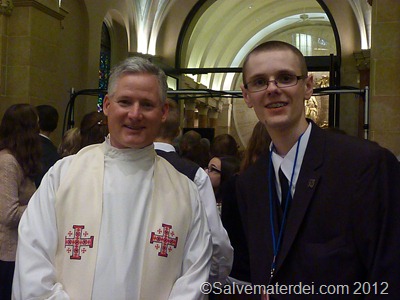 My family was blessed to participate with the music for this celebration. Two of my children played violin and viola, while two others sang in the choir. Under Annie’s gentle direction, weeks of practice and polish manifested into a sound that Heaven must have inspired.

Saturday morning arrived and my eldest served the 11 a.m. Mass, as is his habit. The girls brought their instruments and helped with the final preparations. A frigid rain may have kept the crowds at bay, but it did not dampen the enthusiasm of those present. In a huge white tent in the middle parking lot, folks began to gather around 5 a.m., waiting for a coveted wrist band – a necessary pass to obtain a seat in either the upper or lower churches. Among the hundreds of folks waiting in the wee morning hours were our dear Schoenstatt Sisters from Pewaukee. Cardinal Dolan has a special devotion to Our Mother Thrice Admirable, and Schoenstatt spirituality. One of the sisters had brought a lovely image of Our Mother Thrice Admirable for the Cardinal to bless.

Despite the large crowds and foul weather, the atmosphere remained festive. Cordial conversations bonded intimate strangers, sharing exuberance in the beauty of the day. We were there for HOURS – in that time we passed among thousands of people. Through it all, there wasn’t a harsh word, a snide comment, or a muffled complaint. Dignitaries arrived and the press and cameras seemed to fill every corner. Scott Walker, Paul Ryan, Jim Sensenbrenner, Sheriff David Clark, and Tommy Thompson all waited to share this moment in time. I marveled at how flawlessly the day progressed; joy and peace filled the Basilica.

As Cardinal Dolan and the concelebrating Bishops and priests began to line up for the processional hymn, the exhilaration was palpable. Holy Mass was incredible! Cardinal Dolan was welcomed home by a congregation who truly loves him. He was joined by Archbishop Listecki and Bishops Don Hying, William Callahan, and David Ricken, as well as dozens of ordered and diocesan priests in concelebrating this magnificent Mass. I will never forget the beautiful image of all of those faithful shepherds filling the sanctuary during the Eucharistic prayer.

This was Good Shepherd Sunday, and the reading from John 10: 11-18 seemed chosen for this moment in time.

While Jesus Christ is The Good Shepherd, it is abundantly clear that He elevated Timothy Cardinal Dolan to be one of the Princes of His Church, because this dear human man is himself a good shepherd. He is no mere hired-hand, nor is he one to capitulate to the wolves of contemporary society. No, in recent months Cardinal Dolan confirmed the fiber of his character. As a good shepherd he is willing to defend his flock from the dark threats. Standing up for religious freedom, Cardinal Dolan has demonstrated that when wolves lurk with HHS mandates and assaults to religious liberty, that he will defend not only his flock, but sheep from all folds. Truly his life has become that of a public figure. He can no longer sneak into the Basilica at Holy Hill unannounced and pray in solitude. Where he goes throngs follow, and unlike the crowds at Holy Hill, those crowds are not always filled with well-wishers. Cardinal Dolan is living the life of the good shepherd – he lives for his flock, and is willing to defend both their spiritual and temporal existence from dark and real threats. 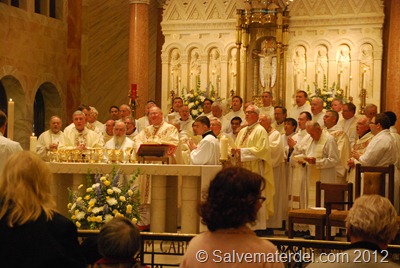 With sincerest gratitude to The Good Shepherd for giving us this good shepherd, may God continue bless Cardinal Timothy Dolan!

With Gratitude and Love © SalveMaterDei.com, 2012.