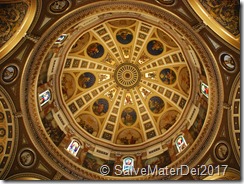 From the time I was a child, I remember Lent being referred to as a journey. Year after year, there has always been a familiar rhythm, a comforting pattern to this penitential season that has absolutely resonated within me. Several of my adult and nearly adult children have expressed to me that Lent is their favorite liturgical season, and cognizant of my own love of this precious season of grace, I can fully appreciate their view. The liturgical readings, seasonal hymns, and homilies are all focused on this period of 40 days during which we are called to journey. Throughout these days, familiar traditions like the readings and prayers of the daily Divine Office, the weekly Stations of the Cross, and the daily meditations are welcome markers along the Lenten road. Yet, even though I grew up in this religious tradition, and – as a cradle Roman Rite Catholic – have been accustomed since my youth to this period of fasting, prayer, and almsgiving, I have long felt the need to examine the significance of this particular journey more closely.

This is my first blog post in a very long time, and hopefully it will be the initiation of a new beginning. Those who know me well understand that it is not merely an over-committed schedule that has kept me from writing -though it has certainly been a handy and justifiable excuse. Among those issues that are churning deeply within my heart and soul is the directive of Pope St. John Paul the Great in Line 54 of his Encyclical Ut Unum Sint, in which the Holy Father declared that “the Church must breathe with her two lungs.” Raised in a traditional Roman Rite Catholic family, I have a deep and abiding love for the tradition into which I was Baptized and Confirmed. Yet, I am also deeply drawn to Eastern Catholicism, and through a program of rigorous study over the past several years, have earned a graduate certificate in Eastern Christian Spirituality. I have found that the struggle to find balance and authentically begin “breathing with both lungs” as an individual Catholic can be challenging. I also recognize that those personal tests often reflect in microcosm the complexities faced by the larger Church.

During this Lenten period, I intend to focus my journey on the path before me; engaging and appreciating both the familiar landscape of the West, as well as the less trodden vistas on the horizon toward the East.