“Them I will bring to my holy mountain, and make joyful in my house of prayer; their holocausts and sacrifices will be acceptable on my altar, for my house shall be called a house of prayer for all peoples (Isaiah 56:7).”

The Basilica of the National Shrine of Mary, Help of Christians is one of my most cherished places. Years ago I stated that if God were to bestow a kiss on the people of Southeastern Wisconsin, it would look like Holy Hill.

Sanctuary of the Upper Church, Basilica of the National Shrine of Mary Help of Christians at Holy Hill © SalveMaterDei.com, 2012.

Among my earliest memories, Holy Hill features prominently. I recall journeying with my family from our home in Michigan to visit this National Shrine of Mary, at Holy Hill. I was about 3 years old at the time and had never seen such a glorious church! The beauty and magnitude of this magnificent structure dedicated to the Mother of God, impressed me deeply. I recall climbing (and climbing) what seemed like a gazillion steps, from the lower parking lot to the upper church, and later that day climbing all 173 steps to the top of the tower. My father did not like heights, and part way up the tower, he turned around and headed down to the landing. Grasping my mother’s hand, I headed up the narrow winding stairs, to the top of the tower. I remember peering out the round window near the summit of the climb. I felt like I was on top of the world and could see forever! (Little did I know that three decades later, both the neighborhood in which I would raise my children and the cemetery where my parents’ mortal remains rest could be seen from that very window.) 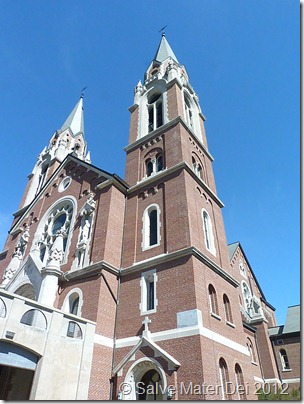 In the 1980’s, I would visit Holy Hill with my fiancé and my parents. About a half hour before Mass, my betrothed and I decided to climb to 173 steps up to the tower. Mom and Dad opted to wait for us in the main church, while we quickly buzzed up the stairs. As I confidently sprinted up the first few flights, I remarked to my husband-to-be: “I can’t imagine why this bothered Dad, it’s just a bunch of stairs.” Well, pride goes before the fall, or in my case the sudden fear of falling. As soon as those words of hubris were out of my mouth, I looked down the center of the stairwell, and gasped. In an instant, I discovered a fear of heights I never knew I possessed. Like my Dad, I turned around and headed down the stairs. Now, twenty-plus years later, I still haven’t managed to make it to the top of the tower I had climbed in my youth.

Under the scaffold during the renovations © SalveMaterDei.com, 2012.

Yet those towers feature prominently in so many memories- my children have literally grown up in the shadow of the Holy Hill towers. We have been blessed to attend near-daily Mass at Holy Hill for years. My sons enjoy the privilege of serving Mass frequently, and my older children sing in the choir. We have developed deep and lasting friendships with the wonderful Carmelite friars who dedicate their lives to the care of the Shrine and its pilgrims. 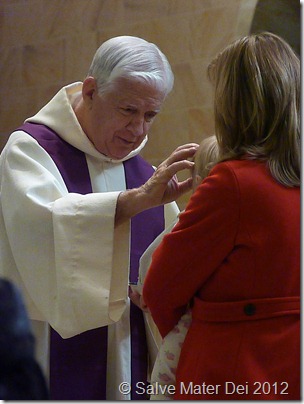 The Discalced Carmelite Friars are Stewards of this Sacred Site © SalveMaterDei.com, 2012.

It is impossible to express with mere words what this sacred space means to my family and I. Through the years, Holy Hill has captured a cherished place in our hearts. The tapestry of memories includes threads of joy, laughter, tears, and friendship. First Communions, First Reconciliations, graduations, May Crownings, Corpus Christi Processions, and the funerals of dear friends – our family has celebrated sacraments and milestones within these hallowed walls. Mom and Dad’s wakes were celebrated in the Old Monastery Inn. Truly, from my parent’s gravesite the view of Holy Hill is magnificent. I could never have imagined in 1968 that our bond to this sacred site would be so great. 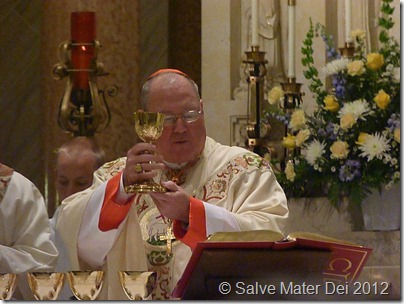 Cardinal Timothy Dolan at the April 28, 2012 Mass of Thanksgiving © SalveMaterDei.com, 2012

Today, Holy Hill celebrates a milestone of its own. On July 16, 2006, the Feast of Our Lady of Mt. Carmel, then Archbishop Timothy Dolan announced that Pope Benedict XVI had approved the elevation of Holy Hill to the status of a minor Basilica. The occasion of the announcement was not only the Feast of Our Lady of Mt. Carmel, but also the 100 anniversary of the arrival of the Discalced Carmelite Order. Four months later, on November 19, 2006, Archbishop Dolan celebrated the Mass officially dedicating The National Shrine of Mary Help of Christians as a minor Basilica. Today, we celebrate the sixth anniversary of this dedication. 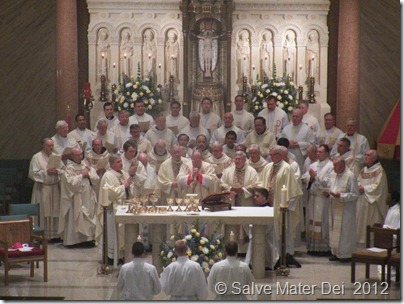 Holy Hill is a treasure. On April 28 of this year, Cardinal Dolan returned to this beloved Shrine to offer a Mass of Thanksgiving following his elevation to Cardinal. Over the years I have often heard Cardinal Dolan describe Holy Hill as “Mary’s House.” Perhaps this is why Holy Hill bears such significance for many of us. Our lives unfold here, and we sense that the Blessed Mother is truly a heart-beat away. Through Holy Hill, we are linked to Our Lady and her Beloved Son.

During this Year of Faith, Archbishop Jerome Listecki, in accord with the Apostolic Penitentiary, has declared that the Christian faithful of the Archdiocese of Milwaukee who, having fulfilled the required conditions of Sacramental Confession, Eucharistic Communion, prayers for the Supreme Pontiff’s intentions, “and in a spirit of total detachment from any inclination to sin may benefit from a Plenary Indulgence” by visiting the National Shrine of Mary Help of Christians in the form of a Pilgrimage. “Pilgrims must participate in a liturgy, or at least pause for an appropriate time in prayer and meditation, concluding with the recitation of the Our Father, the Profession of Faith in any legitimate form, Invocations of the Blessed Virgin Mary, and where appropriate of the Holy Apostles or patron saints.” The full text of the official decree can be found at: http://www.archmil.org/Year-of-Faith/Plenary-Indulgence.htm.

“Blessed are they who dwell in Your House, O Lord.” © SalveMaterDei.com, 2012 EA Photo

The Basilica of the National Shrine of Mary at Holy Hill is a uniquely cherished site. Please join me in praying for continued blessings to flow from this sacred Shrine. Please pray for the pilgrims who visit and for the dedicated Carmelite Friars who are stewards of Mary’s House. All for the Greatest Honor and Glory of God!