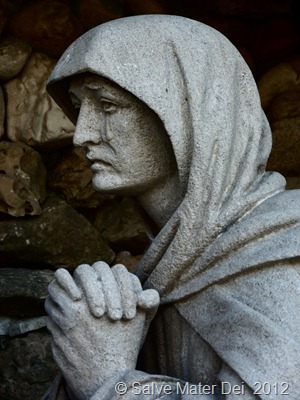 Weeping for her Children, because they were no more. . . © SalveMaterDei.com, 2012

A voice was heard in Rama, sobbing and loud lamentation; Rachel weeping for her children, and she would not be consoled, since they were no more (Jeremiah 31:15).

Today we celebrate the Feast of the Holy Innocents and in so doing we honor the lives of the infants who were slaughtered at the command of King Herod.

When the Magi had departed, behold, the angel of the Lord appeared to Joseph in a dream and said, “Rise, take the child and his mother, flee to Egypt, and stay there until I tell you. Herod is going to search for the child to destroy him.” Joseph rose and took the child and his mother by night and departed for Egypt. He stayed there until the death of Herod, that what the Lord had said through the prophet might be fulfilled, “Out of Egypt I called My Son.”

At The Kings Command These Innocent Babes Were Put to Death. . . .

When Herod realized that he had been deceived by the magi he became furious. He ordered the massacre of all the boys in Bethlehem and its vicinity two years old and under in accordance with the time he had ascertained from the magi. Then was fulfilled what had been said through Jeremiah the prophet: A voice was heard in Rama, sobbing and loud lamentation; Rachel weeping for her children, and she would not be consoled, since they were no more (Matthew 2:13-18).

In the midst of Christmas bliss, our joy is today tinged with sorrow. It is impossible to contemplate the concept of Christmas without simultaneously thinking of children. The Christ Child is integral to the nature of Christmas itself: without the Divine Babe, Christmas itself would not exist. Both religious and secular society recognize the centrality of children to Christmas. From crèche to carolers, cookies to candy canes, our cherished Christmas images reflect the joy of innocence. We treasure memories of our own youthful Christmases past, and strive to allow our progeny to experience cherished traditions with the same delight we held so long ago. 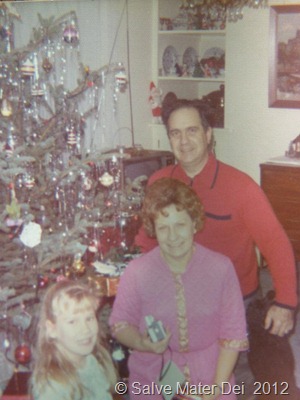 Cherished Memories of Christmas Past. © SalveMaterDei.com, 2012

This rhythm of innocence and joy is among the blessings of this sacred season. Fresh are the memories of our youngsters kneeling by the crèche to wish Baby Jesus a “Happy Birthday”, of wee ones enthralled with glittery festive wrap, chubby cheeks sticky with holiday sweets, and angelic choruses singing “Silent Night.” Yet, today, on the Feast of the Holy Innocents we acknowledge that the Cross and the Crib are not all that far apart. If we are to embrace the Babe in the Manager, we must also prepare ourselves accept the Cross as well.

We must be Prepared to Welcome both the Christ in the Crib and One on the Cross. © SalveMaterDei.com, 2012

Ours is an imperfect, fallen, temporary world. Eternity is forever and in His wisdom, our loving God allows us to unite our suffering with that of His beloved Son. This grace is offered to all, irrespective of age, race, or station in life. The tender babes who we remember as the Holy Innocents achieved the grace to perfectly reflect Christ to a troubled world.

The martyrs whose feast we celebrate were victims of the cruel, irrational jealousy of King Herod. Their innocence and light contrasts his evil darkness. Herod “The Great” is recorded in history as a brutal, maniacal, despot; diabolical shadows are evident throughout his entire reign. Herod was appointed Governor of Galilee by Rome at the age of 25. His cruelty was already known and condemned by high-ranking Jewish officials. He briefly lost his throne in a power struggle with his nephew, Antigonus; upon which Herod swiftly traveled to Rome to politically spar for his precious throne. Evidently he was persuasive and his history of brutal suppression of opposition was thought by Rome to be an asset; the Roman Senate declared Herod “The King of the Jews” c. 39 B.C.

Upon returning to Judea, and securing his throne, Herod promptly married the adolescent niece of Antigonus, Mariamne I, in an effort to ameliorate Jewish discontent at his return. Herod banished his own wife Doris and her children rather than deal with palace squabbles over legitimate heirs to the throne. Actually this fate was kinder than that which was in store for Mariamne and some of her sons. Fueled by jealous rage and paranoia Herod had each of them brutally murdered. 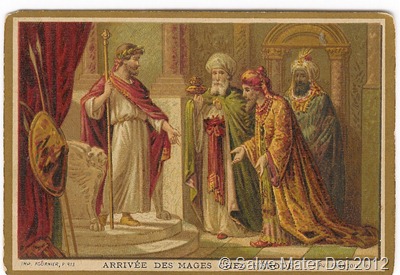 Aware that his subjects despised him, Herod “The Great” devised an elaborate plan to ensure that at his death his subjects would mourn. His final illness was described by the renowned Roman historian Josephus. He recounts details that include visible worms within his flesh, purification, and agony, – his son, Herod Agrippa’s fate included a similarly recorded death. As Herod’s health began to fail, he ordered that many of the most beloved citizens and revered rabbis be imprisoned and that upon his death they be executed. There is however some evidence that Herod’s son Archilaus failed to carry out this diabolical request.

Herod “The Great,” the Roman appointed “King of the Jews,” was an evil man. Darkness and light cannot exist simultaneously. The True Light was coming into the world, and neither Herod, nor the Evil which fueled him, could tolerate that reality. Thus, in an effort to extinguish the Light, Herod ordered the slaughter of all baby boys two years and under living in the region of Bethlehem. These children died because they resembled our Savior in gender, age, and innocence. Their senseless massacre was mourned in heaven and on earth. Truly one can sense God Himself weeping over their deaths. Two millennia later tears are still shed for their passing and their lives are remembered with great devotion. They have achieved the glory of immortality that eluded their brutal murder.

These babes were martyred because they resembled the Christ-Child. Yet, for those of us who believe, there is no greater grace than to conform perfectly to Our Savior as to be confused for Him. In reality, those of us who bear the name Christian strive daily to become living, breathing images of Christ, such that when one sees us they truly see Him alive within us. The Holy Innocents achieved this monumental task at a tender age. 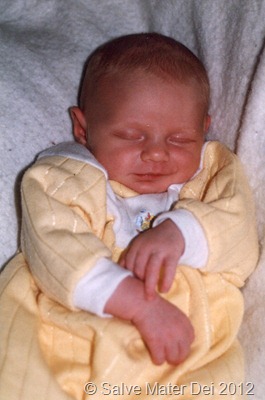 In our world today there are other holy innocents whose lives speak volumes. Last month a young boy named Andrew succumbed to an aggressive brain cancer. His faith was unwavering, and in his final weeks he was often heard praying and offering his suffering for other children with cancer. He prayed that his family might accept his death, and that they all might one day be reunited in Paradise.

Last year, another young girl prayed that closeness which through her devastating illness had bonded her troubled family would not be shattered upon her death.

Each day in the abortion mills throughout this country and the world, thousands of precious, tiny lives are taken. Their light is extinguished by the darkness of ignorance and selfishness.

One has only to look to the recent events in Newtown Connecticut to sense the preciousness of innocent lives, and that fact that dark and disturbed people still exist.

Today, as we remember the Holy Innocents and celebrate their Feast, let us pray that we too achieve the grace to resemble Christ so closely that we might be mistaken for Him. Let us pray for all the innocent children of the world – born and unborn – that they might enjoy freedom to live in health and safety, and come to proclaim the reality of the love of Christ.

May His Light shine through them and through us for all eternity.