This is one of those stories that is a bit too personal to share, however, for the potential hope it may offer, I’m willing to swallow my trepidation and post it. Yesterday we were at the funeral of one of my husband’s patients. This lovely lady died on Monday, which happened to be the eleventh anniversary of my Dad’s death; and now her funeral coincided exactly with the anniversary of his burial. Earlier in the day the kids and I had stopped out at the cemetery to pray and reflect.

My eldest son reminded me of the stark contrast in weather. Yesterday was sunny and warm, and it was relatively easy to navigate our path to the grave to pray. Our favorite little white church stood silhouetted against the blue sky, and offered a peaceful vista. Eleven years ago, the winter had supplied a record 100+ inches of snow. The wind howled as we cautiously trudged through the snow and ice. The VFW members who provided the twenty-one- gun salute and taps had a treacherous descent down the steep hill to the grave. The memory of their kindness and devotion still brings a lump to my throat. Yesterday the kids and I prayed and reminisced, sharing stories, snowballs and joy. With delight I watched them bound through small drifts and patches of grass to stand outside St. Mary’s and offer a prayer. I smiled as my ten-year-old daughter chased her little brother back to the car, her long-braids bouncing in the sunlight. I knew her Grandpa George would find the moment as picturesque as I, and was probably smiling an approval from up above.

Later that afternoon, we paid our respects to one of my husband’s 77 year-old patients. My daughters had visited her in the hospital, and now watching her family struggle between faith and grief brought back a flood of emotions. I shared part of the following story with her daughters and as they seemed to derive hope from it, I have decided to share it here.

Weeks before my Dad had been diagnosed with a devastating immunoblastic cancer, I had suffered a miscarriage. The loss was devastating. My soul and body ached. As I struggled to cope with the loss of my child, I also began to prepare myself for the loss of my father. The renowned French Henri de Lubac once wrote, “Suffering is the thread from which the stuff of joy is woven.” Those words perfectly reflect the path my soul was on.

Each day that autumn I would bundle three small kids in the car, and head off to the hospital for radiation or chemo for Dad. We’d stop at St. Hubert’s Chapel on the way home, to utter a quick prayer before our Lord in the Blessed Sacrament, and an “Ave” before Our Lady’s statue. If Dad was up to it, we’d stop at the Alzheimer’s unit of the nearby nursing home to visit my Mom. While my parents held hands in the corner like a pair of teen-agers, the kids crawled around , caused mischief, and utterly entertained the residents. Through the profound sadness, there was deep and raw love. Dad would smile and tell me that when he looked into Mom’s eyes she appeared to him as lovely as she had forty-seven years ago. True beauty existed here amid walkers, wheelchairs, and canes. Those vivid memories are a treasure.

On the Epiphany, our dear friends Fr. Bernie and Msgr. Roger stopped by to anoint my Dad, and officially receive him into the Church. Roof-rakes had proved useless that year. Now a January thaw had begun, and as the pack ice that enveloped the roof had begun to melt, water was seeping into the house. The light-fixture in the foyer looked like a fish bowl with a couple of petrified lady-bugs floating on top. God has a sense of humor. Never would I have imagined this to be an occasion of grace, but it was. Monsignor Roger was visiting from Ghana. Bundled like a polar-bear, he joked about how delightful it was to experience our North American winter. He gingerly stepped over the towels, and buckets, and ignored the dripping ice-water to embrace my Dad with Fr. Bernie. I was mortified at the state of the house. However, my dear priests were completely nonplussed. With joy my Dad received his Sacraments, and entered the Catholic Church on his death-bed.

Later, as Dad and I reflected in the joy of the moment, I knelt at his feet, and took his hands in mine. Looking up, I simply asked: “Dad, if you get to Heaven before I do, would you take care of my little Francis, and would you ask God for another child for us?” With fatherly love, Dad smiled that great smile of his, nodded his assurance, with an “of course.” 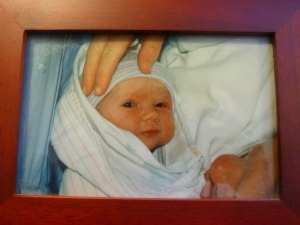 Dad died two weeks later. Exactly nine months to the day of his funeral ( and to the hour of his Mass of Christian burial), I held a newborn baby girl in my arms. Yes indeed, “Suffering is the thread from which the stuff of joy is woven.” Each time I smile at the face of my now 10 year-old daughter, I am reminded of God’s eternal love. In her I see the answer to my deepest prayer. I know God’s plan exits beyond the limits of our horizon; The Communion of Saints is as real as the depth of His love. He answers each of our prayers, and makes sense out of the tumult and apparent chaos of our daily lives – though often we cannot see it at the time. Even suffering itself is a gift; a precious one, not to be wasted; for in it the fabric of joy is contained.

My Life is but a weaving
between my Lord and me;
I cannot choose the colors
He worketh steadily.

Oft times He weaveth sorrow
And I, in foolish pride,
Forget He sees the upper,
And I the under side.

Not till the loom is silent
And the shuttles cease to fly,
Shall God unroll the canvas
And explain the reason why.

The dark threads are as needful
In the Weaver’s skillful hand,
As the threads of gold and silver
In the pattern He has planned.

He knows, He loves, He cares,
Nothing this truth can dim.
He gives His very best to those
Who leave the choice with Him.

Through Our Lord’s skillful hand, may all your sorrows be turned to joy.